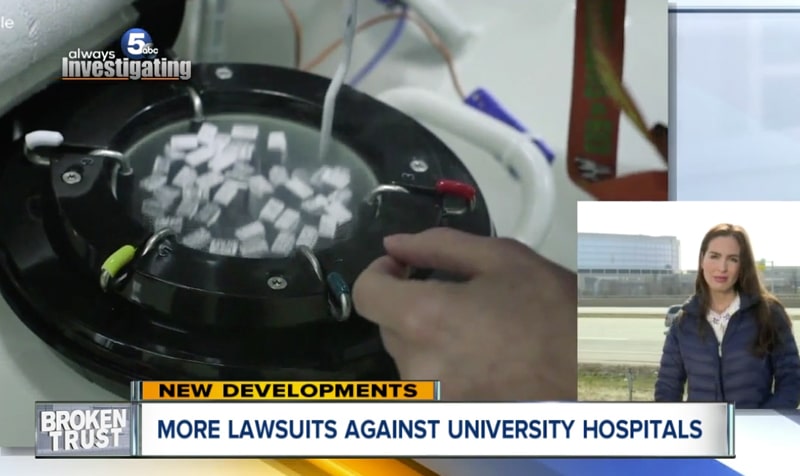 Posted at 20:17h in Uncategorized by Peiffer Wolf
0 Likes
Share

New lawsuits have been announced almost daily since University Hospitals first admitted to its fertility clinic failure. The hospital is now facing a mounting stack of class action and individual lawsuits from heartbroken families, many who lost their last chance at having a biological child.

About 900 patients have now received the devastating news that their eggs and embryos were affected in a storage tank malfunction.

Peiffer Rosca and Wolf, another one of a handful of firms involved.

“Plaintiffs viewed their eggs and embryos as their future children,” Lydia Floyd of Peiffer Rosca and Wolf said when the firm first announced their class action suit.

“You put so much faith into the physicians and the medical team and to have this taken away and have your hopes and dreams destroyed,” Amber Ash, a devastated UH patient, said.

The couple found out early on in the malfunction debacle that their embryos are no longer viable.

Elliott Ash, who was diagnosed with a rare form of cancer in 2003, decided to bank his sperm at age 23 before they were destroyed by chemotherapy. The couple has had their embryos stored at UH since 2014, paying about $400 a year for the service.

“The medical community calls it tissue, I like to think of it as my children. My frozen children,” Ash said.

It still hasn’t been decided whether or not one judge will preside over all of the pending cases against UH, which is now up to more than 117, including class action and individual. Judge Stuart Friedman is expected to make that decision soon.

If you or your family have been the victim of the embryo disaster at University Hospitals Fertility, please Contact the Fertility Lawyers at Peiffer Rosca Wolf for FREE Consultation by filling out our simple online Contact Form or by calling 415-766-3544.