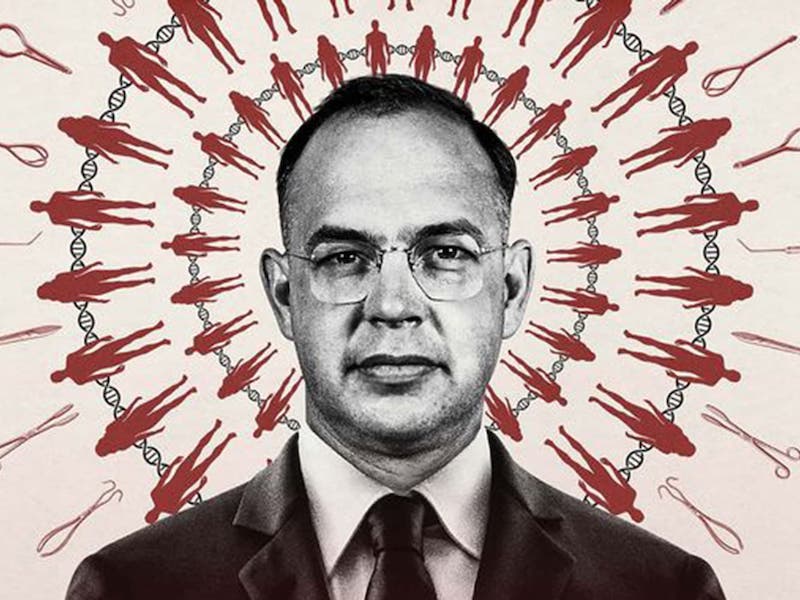 “Parentage is a central part of identity, so the discovery that one doesn’t share a biological connection with one’s mother or father is naturally a shock. Far worse, though, is finding out that the people who did create you were monsters of an unforgivably heinous sort—a fate that befell many men and women whose birth mothers had sought fertility treatment from Pioche, Nevada’s Dr. Quincy Fortier.

Baby God (premiering Dec. 2 on HBO) is the story of Fortier, who over the course of decades, impregnated an unknown number of female patients at his Women’s Hospital. But more crucially, it’s the story of some of the children he spawned, none of whom had any clue that Fortier was their dad until they attempted to trace their genealogy through Ancestry.com DNA kits, or were contacted by others who had done likewise and turned up a previously unknown connection to the physician. Through their experiences, Hannah Olson’s wrenching documentary exposes a legacy not just of biology, but of inherited deception, betrayal and violation, since as eventually becomes clear, Fortier wasn’t simply a cretin who surreptitiously implanted innocents with his own sperm—he was a serial pedophile who preyed upon his own children, including one stepdaughter whom he personally impregnated.

As noted by Brad Gulko, one of Fortier’s offspring, the doctor operated in a pre-DNA era in which lineage was considered fundamentally unknowable, thus making it far easier for men to rationalize the practice of donating their own sperm during medical school and—in cases such as Fortier’s—to mix their own genetic material in with that supplied by donors (who were often patients’ husbands). They simply thought no one would ever be able to find out, and thus the greater good outweighed their duplicity. With DNA analysis now an over-the-counter process, however, such ruses are far more difficult to pull off, and it wasn’t long before Fortier’s subterfuge became front-page news—and landed him in court.

Fortier was never put behind bars for his behavior, nor did he even lose his license, continuing to work into his nineties from his home, where he lived with two adopted daughters to whom he used to give routine physical exams. One of them refuses even to show her face on-camera during interviews, and the other, Sonia Fortier, grimaces while admitting that she doesn’t want to know if her dad sexually abused his kids from his prior marriage (she says he never touched her). His son Quincy Fortier Jr., however, is less cagey about Fortier’s true nature. “My father was crazy. Also, a pervert,” he pronounces, explaining that his dad molested him, each of his four sisters, his younger brother, and virtually any other kid that came into his orbit. “He wanted to play,” he says, with disgust.

Sonia contends that, “In his mind, he meant no harm,” and surmises that Fortier used his own genetic material to get women pregnant because people didn’t care about their backgrounds as much as they do now. In other words, he was justified because folks were content to be blissfully ignorant about any bio-scams being perpetrated against them. That’s a pretty weak answer to the question of why Fortier kept his behavior secret from his patients, and underlying all of Baby God is the bedrock understanding that Fortier’s willful avoidance of transparency is itself proof that what he did was wrong—and moreover, that he knew it was wrong.

Fortier’s saga is hardly unique; Baby God’s coda indicates that more than two dozen American fertility doctors have been accused of covertly impregnating patients with their own sperm, and even a cursory Google search results in articles about numerous kindred foreign specialists. Olson’s film is less interested in the ugly overarching phenomenon of which Fortier is an example, however, than in the human toll of his wretchedness. That appears to be considerable, given that conversations with a handful of Fortier’s children (whose numbers are impossible to calculate, so prolific was he in aiding wannabe-mothers) are laced with resentment, fury, sorrow and a profound sense of doubt and confusion.

During the course of her investigation into her Fortier-linked past, detective Wendi Babst confesses that trying to figure out how Fortier affected her present—literally and figuratively—is a painful process, because his mark is everywhere (“It’s like a chain reaction that I can’t really stop”). Mike Otis grapples with the realization that, because Fortier is his dad, he’s now free of the shame that came from thinking his mother’s abusive ex-husband had fathered him. For Jonathan Stensland, reckoning with a Fortier pedigree is even more complicated, because his mother was Fortier’s adopted daughter, whom he impregnated during a routine exam, and then sent away to a Minnesota home for unwed mothers so she could give up her infant for adoption. Stensland recounts his subsequent adulthood encounters with Fortier, who made absurd excuses as to how this all took place—at one point, Fortier reportedly suggested it might have been a “virgin birth”—and the ongoing anguish of his origins is plain to see on his conflicted countenance.

“Bad means don’t justify the ends,” asserts Fortier’s former colleague Dr. Frank Silver towards the conclusion of Baby God, neatly summing up any lingering debate about whether Fortier had a right to do what he did. Nonetheless, even Silver and fellow Women’s Hospital OBGYN Dr. Harrison Shield chuckle at the fact that, by selling their semen during medical school, they too are (or could be) the fathers of numerous offspring, thereby revealing their own somewhat casual attitude toward this practice.

Olson’s tender and restrained non-fiction film, though, doesn’t take Fortier lightly, detailing via heartfelt testimonials the damage wrought by this single individual’s inexcusable con, which left so many people feeling ashamed of their heritage, and very existence. Baby God opens with images of Fortier’s abandoned Women’s Hospital facility, where shades hang cockeyed, medical equipment gathers dust, files lie scattered about, and paint peels off the walls, and those sights prove to be not only haunted visions of a crime scene, but fitting visual metaphors for the wreckage and ruin Fortier ultimately left in his wake.”